This paper presents ThreadedChat, a prototipe chat interface which structures the chat turns as a tree similar to Microsoft Windows Explorer. The elements of this structure are the threads, pockets of turns and responses.

According to the authors, a proper use of ThreadedChat eliminates the possibility of ruptured sequences of turns, one of the major usability problem of common chat application.

The user study did not reveal any significant effect in performances of ThreadedChat over a control application. However the authors claimed a significative effect in the turn balance.  Additionally the application was rated significantly worse than standard chat application as it breaked the flow of the conversation into many points of focus, with a consequent increase in the cognitive load. 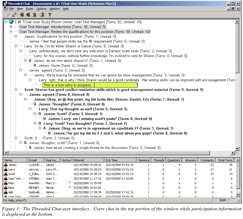