This chapter recalled the distinction between macroplanning and microplanning. In macroplanning we elaborate our comunicative intention, selecting information whose expression can be effective in revealing our intentions to a pratner in speech. We decide on what to say, linearizing what goes first and next. In microplanning, or “thinking for speaking”, we translate the information to be expressed in some kind of “prepositional” format, creating a semantic representation, or message, that can be formulated. Applied to spatial discourse, we can say that macroplanning involves selecting referents, relata, and their spatial relations for expression. Instead, microplanning consists of applying some perspective systems that will map spatial directions/relations onto lexical concepts.

This chapter contains also a discussion of advantages and disadvantages of deictic, intrinsic and absolute systems for spatial reasoning. For instance deictic perspective is safe from conversness and transitivity mistakes.

The first part of this paper reviews some major properties of three perspectives language users can take in mapping spatial relations onto linguistic expressions, the deictic, intrinsic and absolute systems. Although the intrinsic system is most widely used in the languages of the world, its mathematical properties are a hindrance to spatial reasoning (it lacks transitivity and converseness). The second part of the paper explores whether ellipsis in spatial expressions (for instance in “you go right to a church and then to a bridge”) precedes or follows perspective taking. An analysis of Levelt-type network description data reveals that ellipsis is pre-perspective taking, which is a non-Whorfian conclusion. 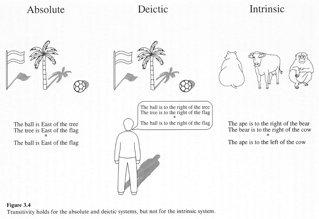