Biologists have constructed a genetic map of Europe showing the degree of relatedness between its various populations. This genetic map contains many similarities to the geographical map. The major genetic differences are between populations of the north and south Europe.

Researchers say that the patters of genetic differences reflects the colonization history of Europe, which dates back 45,000 years ago. The map also identify the existence of two genetic isolated groups: the Finns and the Italians.

The former arose because the Finnish population was at one time very small and then expanded, bearing the atypical genetics of its few founders. The latter is between Italians (yellow, bottom center) and the rest. This may reflect the role of the Alps in impeding free flow of people between Italy and the rest of Europe. 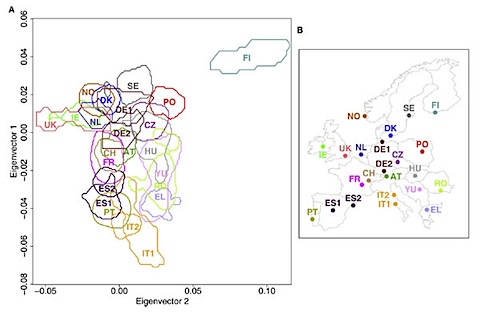