A. Zimmermann, A. Lorenz, and R. Oppermann, “An operational definition of context,” in CONTEXT’07: Proceedings of the 6th international and interdisciplinary conference on Modeling and using context, (Berlin, Heidelberg), pp. 558–571, Springer-Verlag, 2007. [PDF]

By summarizing previous work, the authors presented an operational definition of context that could be used to characterize the situation of anentity. According to the authors, elements for the description of this context information fall into five categories:

Also, according to the authors something is context because of the way it is used in interpretation, not due to its inherent properties. When interacting and communicating in everyday life, the perception of situations, as well as the interpretation of the context is a major part. Therefore, the author presents some operational additive to the general definition: context transitions, variation of approximation, change of focus, shift of attention, shared contexts, the establishment of relations, the adjustment of shared contexts, and the exploiting of relationships. 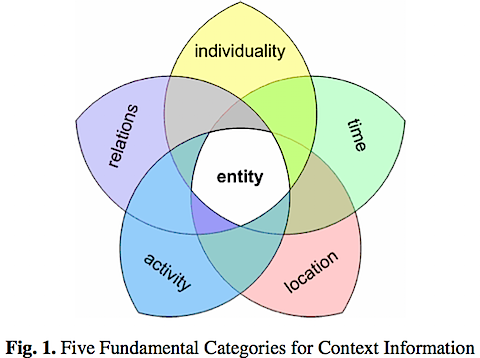