CHI2007 was a great experience: the conference gathered 2622 participants from 42 countries. It was my first CHI!

I started on Sunday with a course on HCI History: Trajectories into the Future, given by Jonathan Grudin. The presenter showed a graph putting in relation the size of computers with the technological changes that caused this miniaturization. In the same scale he presents the change of interest in the computer-humans factors. One of the innovations that drove the shift of focus in the HCI community in the 70’s was the shift of focus on non-discretionary use of computers. One interesting thing to notice was that in CHI’83 (the first CHI conference), psychologist were never cited. The current player in HCI is are the mobile applications. The next player in HCI will be marketing: the goal of a web site for an usability expert is to bring fast the user to his goal. For the marketing designer it is to expose the user to the wides range of possibilities. [here are my running notes taken during the course]

On monday I attended the session on “An Exploratory Study of Input Configuration and Group Process in a Negotiation Task Using a Large Display” (J. P. Birnholtz et al.) where the authors were trying to answer this question: how many pointing devices should be provided to a group? The authors conducted a controlled experiment showing that the number of input devices can affect the outcomes. The participants had to edit collaboratively a front page of a journal. Each article contained keywords of a particular kind. Each participant was responsible for a particular kind of keywords. The higher the number of keywords the higher points that the participant received. The author registered an higher quality of discussion in the single mouse condition, while the registered more self-interested actions in the multi-mouse condition. Single mouse forced shared focus, at the cost of reduced productivity. [url]

On thursday U. S. Pawar (Microsoft India) also presented a research on the use of “Multiple Mice for Retention Tasks in Disadvantaged Schools“. Results suggests that shared use is as effective as one-student-per-pc.

On monday there was a session on capturing life experiences that was tremendously interesting: the use of prosthetic memory. The first talk I attended was presented by V. Kalnikaite (University of Sheffield, UK): “Software or Wetware? Discovering When and Why people Use Prosthetic Memory“. The authors developed an application called ChittyChatty where people could write simple annotations and record some audio information along. The text was used to recall the content of the audio message, as an index. Prosthetic Memory designers should focus more on device efficiency over accuracy. In the same session there was another presentation on SenseCam: a prosthetic memory device developed at Microsoft Research Cambridge: “Do Life-Logging Technologies Support Memory for the Past? An Experimental Study Using SenseCam“. The author showed in this presentation how the position of the camera on the user’s chest was compared to a self point of view.

One of the last sessions that I attended on the first day was that of Mobile Applications. Matt Jones presented a note on “Questions not Answers: A Novel Mobile Search Technique“. The authors presented a novel perspective on the mobile search problem using low-cost, incidental information. The note argue that this technique can be used to provide users with insights into the locations they encounter. To the authors, presenting previous queries in situ can give “a sense of place”. In the same sessions Stephen Brewster presented a note on the use of “Tactile Feedback for Mobile Interaction“. The main argument was that on-screen keyboard do not give tactile feedback for key-press. The authors equipped a mobile phone with some vibration actuators and defined the concept of TACTONS, the equivalent of a phonemes, for the tactile perception. The authors reported of a study conducted in the subway of Glasgow (a noisy environment). Results showed that participants were paying more attention in the train situation that in the laboratory setting.

Finally, Mary Flanagan presented “A Game Design Methodology to Incorporate Activist Themes“. She presented a rigorous, systematic means to take human values into consideration in design at many levels. She introduced the framework that they developed: values at play, and a game: rapunsel, and six circles. One of the main issue presented is that there are many social stereotypes that are difficult to overcome in design, like sexual characters. More here. 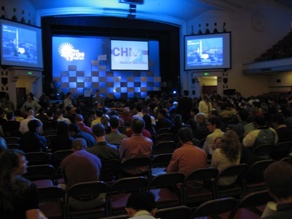