The starting assumption of this work was that in group design situations, the activity of creating and using the marks on the drawing surface is as important as the marks themselves. During observations of design meetings, the authors identified three kinds of actions: draw, write and gesture. These were combined in different ways to support different uses: providing illustrations, or emphasis on a particular part of the talk, provide visual reminders, making references or other uses.

To support these mechanisms at a distance the authors designed a system called Commune where users could superimpose sketches to a common drawing surface while talking. They conducted a tight observation of use of the system by several pairs and they found that neither the talk nor the marks alone effectively communicate the issue under consideration.

One of the advantage that they saw in the use of Commune was the ability to be in the same place at the same time. While this is possible with the virtual superimosition of the marks that is not actually possible in real situations and the authors speculated that this could have been an advantage.

However, they also identified three problems: the stilii were difficult to use with sketches consisting of short line segments; second the drawing space was small and finally Commune constrained gestures to pointing actions. 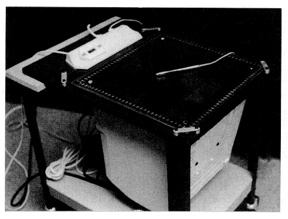