He also processed the data on verbal communication to verify changes in the conversation content. He found a significant reduction of the number of words in conditions of direct reference compared to the voice only condition. Spatial words were replaced by deictic demonstratives and definite referring expressions.

His experiment however did not show differences between the direction of the gaze position transfer (expert to novice vs. novice to expert). Also the experiment did not show differences in mouse vs. gaze reference. Gaze direction is intimately tied to the focus of attention, or better yet, to the focus of external forms of attention. This is only rarely the case for manual pointing.

The author argues that the duration of fixation alone is not a perfect correlate of its communicative role. The means that in order to elucidate the communicative aspect in eye-movements linguistic heuristic should be at work. He makes the example of long fixations which temporaly conicide with verbal remarks of the deictic type could trigger the attention of the partner. 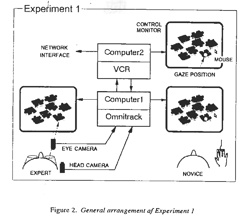