In my current experiment we are investigating the effects of what we called the Task-context and the Conversation-context, on distance problem solving. The conversation-context, is the set of previous utterances which peers rely on to interpret the current utterance, and the task-context is the set of objects and the environment that the peers are talking about. Of course, the context of collaborative work also includes many other aspects such as shared backgrounds or institutional settings but we focus on these two sources of referencing. One could object that the task and conversation contexts are deeply intertwined from a cognitive point of view and form a single context. Nevertheless, from the standpoint of the interface, the task space and the conversation space often occur on the screen as two different areas.

To complete our experimental plan, we were in the need of a chat application that would not offer any support for both the conversation context (e.g., having an history of the conversation) and the task context (e.g., supporting references to the shared workspace). As I could not find an example of existing application with such features, then I decided to build my own, that I called ExtremeChat, named after the fact that using this communication application is an extreme experience. 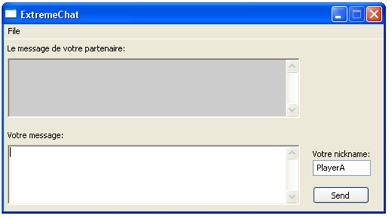 One technical note, ExtremeChat was implemented using PythonCard and it is largely based on the chat example.

I will release the code shortly.