This paper presents an empirical validation of the attention vector sum model (AVS), which predict zone of acceptability for spatial expressions confronted to perceptual stimuli. Their research question was the following: What perceptual or cognitive structures are reflected in linguistic judgments? Does spatial perception shape spatial languagein this instance?

The author presented a number of computational models developed in previous research as well as the AVS: The Bounding Box model, the Proximal and Center of Mass model, The Hybrid Model. AVS is based on the fact that human apprehension of spatial relations involves attention, and that in several neural subsystems, overall direction is represented as the vector sum od a set of a constituent directions.

The authors tested empirically the accuracy of predictions of the different models by presenting the model with the experimental stimuli, recording the model’s output, and determining through the regression how well the model output predicted the empirically obtained acceptability rating.

The study confirmed the predictions of the AVS model: first, spatial terms ratings are influenced by the proximal and center-of-mass orientations. Second, ratings are sensitive to the grazing line (the horizontal line grazing the very top of the landmark). Third, ratings are affected by distance. The model provides a preliminary grounding of linguistic spatial categories in nonlinguistic perception: linguistic spatial categories can be explained in terms of underlying structures that are not linguistic in character. 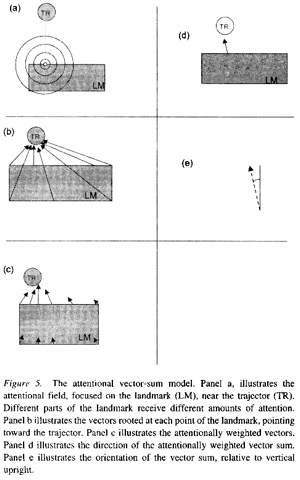