I stumbled upon this nice article of Mathew Honan where he reports his impressions on living with many location-aware applications (LBAs) continuously tracking, and communicating, his position to others. His main concerns regarded, of course, privacy. Basically, he argues that with a minimal number of datapoints it is easy to infer where a person lives or works:

On a sunny Saturday, I spotted a woman in Golden Gate Park taking a photo with a 3G iPhone. Because iPhones embed geodata into photos that users upload to Flickr or Picasa, iPhone shots can be automatically placed on a map. At home I searched the Flickr map, and score—a shot from today. I clicked through to the user’s photostream and determined it was the woman I had seen earlier. After adjusting the settings so that only her shots appeared on the map, I saw a cluster of images in one location. Clicking on them revealed photos of an apartment interior—a bedroom, a kitchen, a filthy living room. Now I know where she lives.

As these technologies are far more pervasive than what we imagine them to be, it is easy for computer illiterates to loose track of where private information might appear. Even worst, once it escapes the control of the person, it is difficult to remove it from the cyberspace:

And location info gets around. The first time I saw my home address on Facebook, I jumped—because I never posted it there. Then I realized it was because I had signed up for Whrrl. Like many other geosocial applications, Whrrl lets you cross-post to the microblogging platform Twitter. Twitter, in turn, gets piped to all sorts of other places. So when I updated my location in Whrrl, the message leaped first to Twitter and then to Facebook and FriendFeed before landing on my blog, where Google indexed it. By updating one small app on my iPhone, I had left a giant geotagged footprint across the Web.

According to Honan, the most interesting benefit of LBAs is the possibility to locate objects or services nearby when a person is on the move. Also, he mention that through these services we can increase our social appearance and perception (e.g., I am here, do you want to have a coffee?). Problem with that is the lack of proper etiquette or protocol.

This issue came up again while having dinner with a friend at Greens (37.806679 °N, 122.432131 °W), an upscale vegetarian restaurant. Of course, I thought nothing of broadcasting my location. But moments after we were seated, two other friends—Randy and Cameron—showed up, obviously expecting to join us. Randy squatted at the end of the table. Cameron stood. After a while, it became apparent that no more chairs would be coming, so they left awkwardly. I felt bad, but I hadn’t really invited them. Or had I?

Finally, Honan points out how we should not give up completely our physical context in favor of digital content. One of the biggest challenge of this field is that for this information to avoid to be invasive, creepy, or isolating. 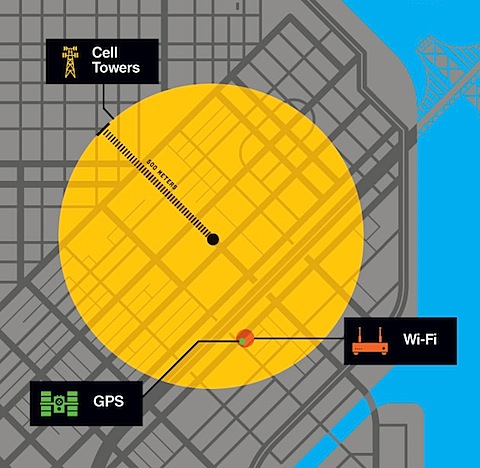