Philip Wagner sent me a couple movies that he edited to help people with reading difficulties to learn from movies. Basically he colorized the actor that speaks and put the caption as a comic balloon close to him/her. Then he uses a karaoke-style highlight to match the pronounced word with the text in the caption. 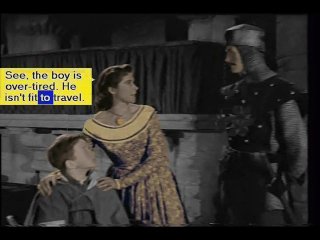 I have more things which in total are about eight hours long.  I have two Robin Hood movies on Dvd discs that  are together about 50 minutes long They are partly slide show and partly movies.  When there is talking it is a slide show with the subtitles and when there is little talking and lots of action it is a movie without subtitles. I use “The Adventures of Robin Hood” Volumes 1 and 2 DVDs that can be purchased from Amazon.com economically. There are 4 episodes on the Volume 1 and 4 Episodes on Volume 2. The episodes are from the tv series begun in 1955 starring Richard Greene as Robin Hood produced in England.  Before I burn them onto DVDs I colorize the actor who is speaking and the faces and hands of the other actors in the scene.  My burn program enhances the scenes by brightening and focusing them better. I burn them into HDTV format which allows more space on the left and right of each frame so I am able to put more captioning on the pictures. I have made textreading programs with no pictures for

“Treasure Island”, “Moby Dick” and “Dr. Jekyll and Mr. Hyde” of which I used my own voice for dubbing the sound which can be used immediately as I have not applied for a copyright for them.

Philip is willing to teach anybody the process that he used to produce these movies. You can reach him at the address philip5147 [@] yahoo.com.