C5 is a distributed simulation framework that uniquely combines five principles for compact, connected, continuous, customizable, and collective simulations. It integrates hardware and software components into a unique and effective learning environment. Learners in a C5-enhanced learning environment engage in connected learning activities through wirelessly networked handheld devices (such as HP iPAQs equipped with IEEE 802.11b or BlueTooth) acting as simulation clients. These clients can access the Web through a simulation server. The simulation server is a centralized computer that lets users combine results from their individual simulations for general comparison, reflection, and group analysis. The server gathers data from client simulations and projects them serving as a visualization, simulation coordination, and classroom discussion tool. C5 is especially well suited for collaborative science and math projects. 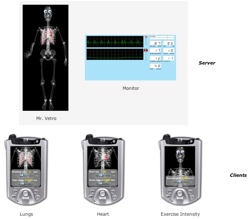 This reminded me of SmokeRings [2] a project in which I participated while at MLE. The basic idea was that people could carry around an handheld device with an environmental sensor so to record the exposure to passive smoke during the day. Then with the recorded data it was possible to customize a simulation showing the effects of such exposure over a long period of time. 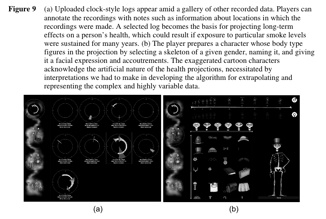 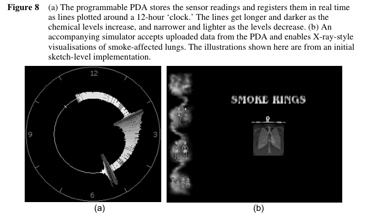 Another project related to Mr. Vetro is wiSim, a distributed simulation environment that was developed at CRAFT. An ordinary simulation executed on a computer is generally controlled by a single user who enters the data (inputs) and gets the results (outputs). Instead of maintaining all in one place controls and results, wiSim spreads these elements across a group of participants. In this way users have to negotiate verbally the interaction onto the simulation, thus striving for an optimal collaborative effort of their learning experience.

Every participant can interact in wiSim using a mobile device. Initially, the user can choose a specific group to join or he/she can create his/her own for other to join. Afterwards, the group can start working on a simulation taken from a list available on the server. Subsequently, the server divides the inputs and outputs of the simulation among the group members. The following step requires the group to enter the parameters necessary to initialise the simulation, which is executed on the server. The results are then dispatched to the users’ mobile devices, allowing them to discuss the extra tweaking required to solve the assignment.

As final remark I would be interested in reading a study where the effectiveness of these distributed simulations have been evaluated. So far the stuff I have been reading describe these systems more at the design-level than at the use-level.

[1] An interactive flyer enables you to play around with Mr. Vetro’s parameters to get a sense of the interactions that occur and explains each aspect of the application.