Research on adult consumers indicates that, when adults shop with friends, this co-shopping has certain advantages for retailers, namely that co-shopping adults tend to spend more time in stores, cover more of the store’s area, and spend more money. Given that such positive effects have been found for co-shopping adults, it seems likely that shopping with friends would be even more important and relevant for teens and, thus, also have a significant and positive impact on retail performance. Peer groups are a particularly strong source of influence in the teenage years.

The purpose of this study was to examine how the social influence of friends might be related to teens’ retailing attitudes and behaviors. The authors’ basic premise was that teens’ evaluations of retailing are an output of a social comparison process with co-oriented others. Specifically, they proposed that shopping with co-oriented friends provides teens with information and normative standards by which teens may evaluate retailing phenomena.

To test these ideas, they collected data from high-school students via a survey design. They found that susceptibility to interpersonal influence from friends was significantly related to teens’ enjoyment and frequency of shopping with friends, which, in turn, were generally related to sentiments toward retailing and spending tendencies. However, the pattern of findings suggests that informational influence may be a more important basis in shaping retailing attitudes and behaviors, while normative influence from friends is not and may even have negative effects. This is consistent with results from other studies indicating that people are more influenced by the information that groups provide rather than by group pressures to conform. It appears that teens are more susceptible to friends’ informational influence, which, in turn, affects teens’ retailing attitudes and behaviors. 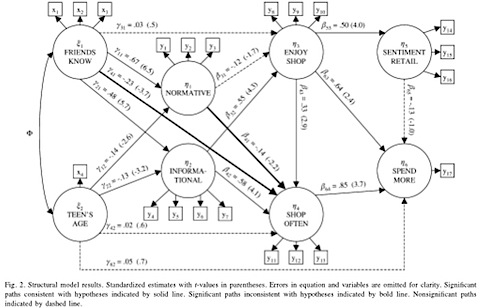