I got interested in this topic while I was discussing with a friend. He said that in rural India geographical maps are printed on silk as it makes them more resistant. Another advantage of the cloth over paper is that it makes easier folding back the map once used. So I googled around and I found that silk maps were intensively used during WWII [2], they were called Escape Maps:

During WWII hundreds of thousands of maps were produced by the British on thin cloth and tissue paper.  The idea was that a serviceman captured or shot down behind enemy lines should have a map to help him find his way to safety if he escaped or, better still, evade capture in the first place.  A map like this could be concealed in a small place (a cigarette packet or the hollow heel of a flying boot), did not rustle suspiciously if the captive was searched and, in the case of maps on cloth or mulberry leaf paper, could survive wear and tear and even immersion in water.  The scheme was soon extended to cover those who had already been captured, although a certain amount of ingenuity was required to get the maps into the POW camps. 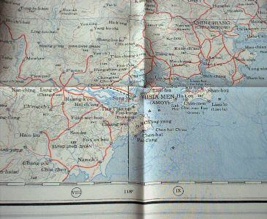 I found this american company that sells some reproduction, and this one which sells silk scarfs with european maps for tourists.