Location awareness is the knowledge of the position of one’s interaction partners both in physical environments and in virtual worlds. This information is extremely important for the coordination of communication and collaborative problem solving especially when participants are not nearby. Nova, in his PhD work conducted a series of timely experiments to demonstrate the impact of location awareness on collaborative work at a distance [Nova, 2007]. He designed an ubiquitous treasure-hunt game, called CatchBob! where three participants had to walk around a campus area to chase a virtual object. They had at their disposal a tablet PC running the interface represented in figure 1. Using this system, they could communicate with their partners annotating the campus map with the stylus of the tablet and have information on their proximity to the virtual object to be found. He compared experimental conditions where partners could see the position of their partners with a control condition where participants could see only their position. After the game, he interviewed the participant. In particular, he asked the participant to draw the recalled path of his/her partners, comparing this information with the real traces from the system logs.

figure 1. CatchBob! interface as seen by one player 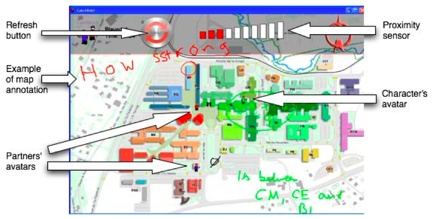 Using this experimental design, he demonstrated that the availability of what he called Mutual-Location Awareness tool (MLA) had an impact on collaboration. In particular, for the players knowing where the others were located both with automatic refresh of the information, or with manual refresh, had inhibiting effects on communication within groups and on the recall of partners’ past positions. It also made the group more passive than those who did not have this interface. Nova and colleagues also analyzed the messages exchanged during the game. He used the coding scheme reported in figure 2, where messages were classed by content and by pragmatic use. Consistently with the process measures described above, he found that players in the control condition exchanged more messages about position, direction and strategy that those with the synchronous MLA. They found also a negative correlation between the frequency of messages about strategy and the number of errors made by the individual when drawing their partner’s path [Nova et al., 2005]. 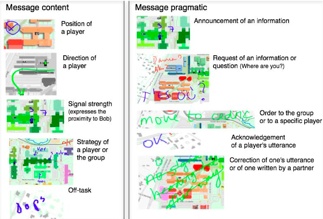 These studies brought forward the various roles of mutual location-awareness ranging from a resource for division of labor to the facilitation of situation understanding or the use of past positions to draw hypotheses about the partners’ future behavior. Nova finally discussed how automating location-awareness can be detrimental to group collaboration in certain situations [Nova, 2007].