In the last couple of days I had a chance of test the upcoming LG  KE970, codenamed ‘Shine’. I have received this unit from Hill & Knowlton, LG’s communications agency, for evaluation purposes. In this post I am summarizing my initial impressions. 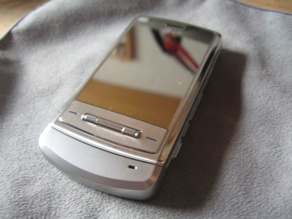 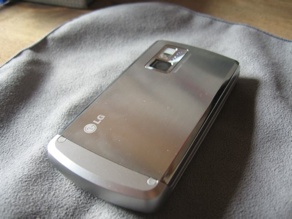 The package was also nice, although I received a pre-launch material which might differ from the commercial one. For instance, the manual and the sync softwares were missing (I took the pictures below with the phone’s camera at standard resolution 640×480). I also had an hard time to find the manual online (something in Korean here). 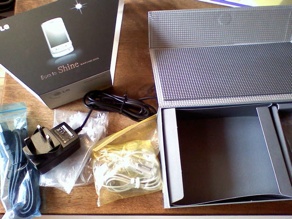 The display is really bright and the interaction with the scroll key is fluid. It took me some time to get used to the left-right function keys but after was easy to use. The menus are pretty intuitive and everything seemed easy to find. It has a 2MB camera with Schneider-Kreuznach lens (+ it has a flash), and it also records voice and video.

The image viewer is able to display Macromedia Flash animations and to open simple Office documents and PDFs.

The internal memory is 50 Mb with the possibility to extend it with microSD memory cards.

There are much better reviews out there that make a better work in detailing all the features of the phone [1], [2]. What I will be doing in the next posts is to detail how to use it with a Macintosh, the thing that interests me. So far it seems to be pretty hard …

One last thing: I posted a video on YouTube that I took with my iSight of the Menus of the phone. The result is decent but it was extremely difficult to realize due to the auto-focus problem discussed above.

More on the LG Sine Blog …