This paper reports a number of experiments conducted to understand user behavior in a social network created essentially by video interactions. The authors crawled and analyzed interactions in YouTube finding many peculiarities of this kind of systems.

For instance, unlike other social networks that exhibit a significant degree of symmetry, the user interaction network shows a structure similar to the Web graph, where pages with high in-degree tend to be authorities and pases with high out-degree act as hubs directing users to recommended pages. This analysis is very useful to detect spammers, which might be nodes with very high out-degree.

The authors also used a clustering coefficient (CC) to show the presence of small communities in the video-response network. Specifically, 80% of all nodes in the entire user interaction network have CC = 0, meaning that higly responsive users do not necessarily ave social links with the contributors of the videos that they are responding to. Therefore, there might not exist a sense of community among the users that receive video responsens from a responsive user.

The analysis also highlighted three kinds of anti-social behavior: a) submission of videos with a long list of misleading tags; b) posting video responses which are unrelated to the original video; and c) ranking boosting of personal video to have them highly visible.

Finally, the author used an inter-reference distance (or IRD) to characterize the user’s behavior: on the sequence of video-responses to video i, it is the total number of responses that appear between two video reponses from the same user. The author compared this metric with a manual coding of social or anti-social user and showed that the metric correctly identifies 80% of anti-social users. 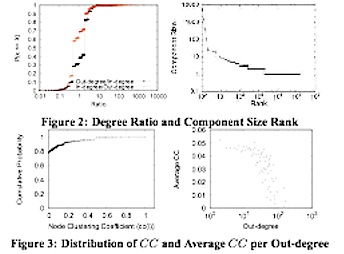