This paper presents a technique for supporting the generation of metadata in Flickr through tag recommendation. The authors used tag co-occurrence to generate a list of tags that could complement some user-entered tags. The initial motivation of the author is that photo annotations provided by the author of the pictures relfect a personal perspective and cotext that is important to the owner but that might be confusing for other users trying to retrieve the same picture. Additionally, they note how suggesting non-obvious tags might be confusing for the users. They validated the tag recommendation using tag assessors that had to verify the “descriptiveness” of the generated tags. 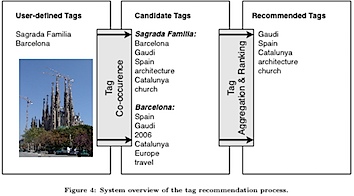