This paper presents the results of a field study involving the use of Huston, a protype mobile application for encouraging activity by sharing step cound with friends.

The authors build three versions of Huston for the pilot study: a baseline, personal, and sharing. During the first three weeks all three groups used the baseline version of Huston which was used to gather the data needed to establish the individual daily step goals. Then they provided one group with the personal version of Huston and two other groups with a sharing version of the application. The personal version provided a daily goal, indication of progress, and recognition for meeting the goal. The sharing version had an additional feature which allowed the users to share the physical-activity related information with members of their group.

They found that the sharing groups were significantly more likely to meet their goal than participants in the personal group. 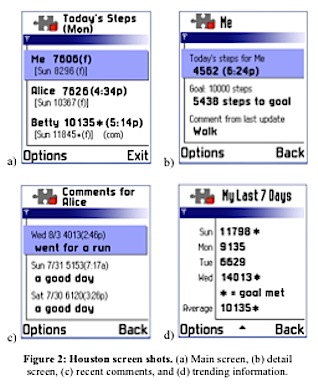