The author of this work aimed at designing a system for motivating physical activity that could be adopted without extra equipment. The argument was that specialized technology for sending physical states of the user are indeed useful but can reduce the widespread adoption of a particular technology. They designed Shakra, an application for mobile phones that was able to detect the fluctuactions in the GSM network and use this information to infer the activity level of the user. This information was then used to inform a group of peers to stimulate competition and support self-awareness of activity levels. The authors critic the transteoretical model because it tries to explain motivation using only intrinsic factors, while communicty influence might just be as important as self-motivation.

They tested the Shakra prototype with three groups of users and they found that the participants were more active when they could see each other’s activity level then during the control periods. 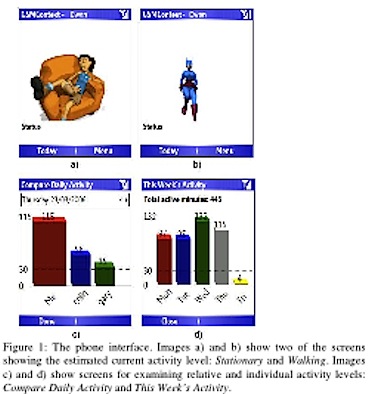