This paper presents a study of how people take notes in meetings. The authors interviewed people who used audio recordings in offices to identify the main benefits and barriers they experienced. Later, they interviewed 28 non-users of audio recording devices about the way they took notes during meetings.

They found a need for supplementing handwritten meeting notes with a verbatim speech record of the conversation. On the basis of this, they built a prototype system that combined co-indexed handwritten notes and recorded audio in a digital notebook. They discussed perceived benefits of this technology.

In their literature review, they discuss some “speech-as-data” applications, such as the Voicenotes (Stifelman et al., 1993) and the Ubiquitous audio (Hindus & Schmandt, 1992). These applications allowed the organization of brief segments of personal audio such as “ideas” or “reminders”. 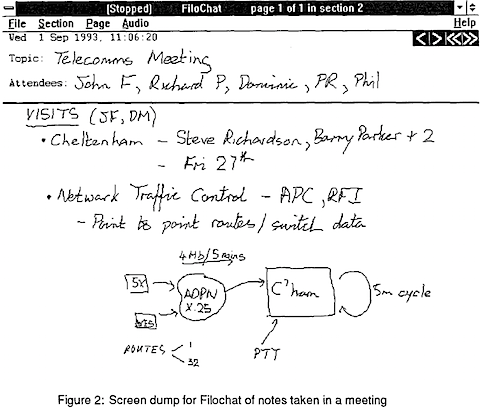