This paper presents Second Messenger, a system of dynamic awareness displays that reveal speaker participantion patterns in a face-to-face meetings, increasing indviducals’ awareness of their own and others’ participantion in discussion. Experimental results indicate that these displays influence the amount an individual participates in a discussion and the procerss of information ahsring used during a decision.making task. These findings suggest that awareness applications brings about systematic changes in group communication styles, highlighting the potential for such applications to be designed to improve group interactions. 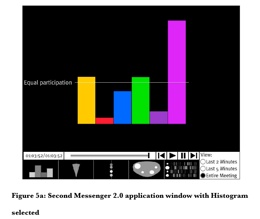