M. Ames and M. Naaman. Why we tag: motivations for annotation in mobile and online media. In CHI ’07: Proceedings of the SIGCHI conference on Human factors in computing systems, pages 971–980, New York, NY, USA, 2007. ACM. [PDF]

This paper present a throughout study of people using a mobile application for tagging pictures. The author conducted photo elicitation interviews of Flickr users that were active in uploading pictures from their mobile using ZoneTag, an ad-hoc application for mobile picture tagging and photo sharing.

The authors defined eight intertwined reasons of why people use tags. These could be described by the different function, being either organization or communication, or sociality, directed to self or to others.

Interestingly, the author found that while adding context is the traditional motivation for annotating printed photographs, this was not the primary concern of interviewed participants: ”while it is likely that tags will provide this function as a currently-unanticipated benefit in the future, adding context to facilitate remembering details about photographs was not the primary motivation for tagging in the present.”

As the picture taken by ZoneTag were automatically uploaded to Flickr, a community portal for photo sharing, other interesting behavior emerge. For instance, some participant reported coordinating tags with other to form a distributed photo ”pool”. 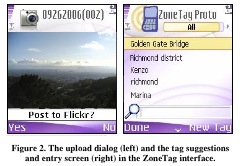